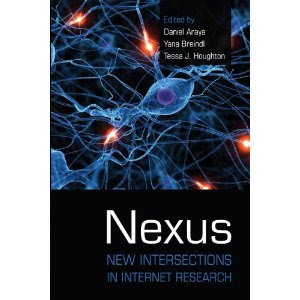 I have very fond memories from the 2009 Oxford Internet Institute Summer Doctoral Programme. Our legacy project (except for the documentary, among many other things including my statement that "I am speaking to space aliens in the future") was an anthology of co-written chapters on various fields of Internet research, taking advantage of our coming from different disciplines, fields of research and continents.

The book project turned out great, covering such different fields as e-Health, hacking, journalism, linguistic developments in Wikipedia, interactions on photo sharing sites. The best practical use for it is using it as a textbook for students in especially the social sciences venturing into Internet research and wanting to know where the research frontier lies in various fields, what methodologies and theories are used, and so on. It is very inspiring reading.

The book was presented at a roundtable session at the AoIR 11.0 in Gothenburg in October, where some of the chapters were individually presented in panels as well.

Of course, the chapter I co-wrote with Yana Breindl of Université Libre, Brussels, holds a special place in my heart. We wrote it using Google docs and Skype during some hectic weeks in December 2009 and January 2010. The result, "Leetocracy. Networked Political Activism and the Continuation of Elitism in Competitive Democracy" is a combination of Yana's fantastic field work on the French/European advocacy group La Quadrature du Net and my own theoretical work on networked activism and democratic theory.

This chapter critically examines the role of networked advocacy groups in the policy making process of intellectual property rights reform. Through analysing the case of la Quadrature du Net, we question the assumption that political intermediaries or elites are dissappearing, leaving space for a more inclusive, direct democracy in which decision-makers interact more directly with citizens. Next to established political actors such as political parties or trade unions, which are integrating Information and Communication Technologies (ICTs) into their working practices, internet-based actors are emerging in a wide range of political areas (Chadwick, 2006).

Such forms of networked political organisations are usually perceived as less hierarchical than traditional mobilizing groups such as political parties, trade unions and other voluntary organizations (Norris, 2002; Dalton, 2008). This development is often interpreted by techno-optimists as a way out of the iron law of oligarchy in traditional politics, offsetting the professionalization of politics and the transfer of political power to technocrats and anonymous international political actors far away from democratic accountability, thus preparing the ground for a more inclusive grassroots-oriented democracy.

However, we argue that intermediary elites still exist. Our discussion will show that internet-based activism constitutes new types of elites in competitive democracy, whose effective forms are heavily dependent on technical and networking skills. Rather than functioning as the base of more egalitarian politics, the growing importance of networked political activism aided by digital media may, on the contrary, create new elites.
Posted by Nils at 12:42 No comments: 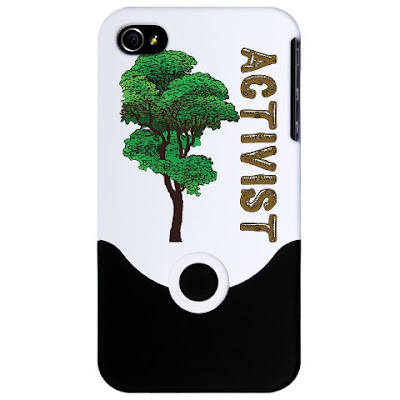 I have co-written an article with Tina Askanius, also a part of the Wahlgren Foundation Doctoral Programme, that has now been published in the latest issue of Interface: a journal for and about social movements. Article here (Creative Common). Abstract below.

The article argues that contemporary protest movements are facing a convergence of what has traditionally been coined as mainstream and alternative media. Traditionally, the broad term ‘alternative media’ has been employed to embrace a wide range of oppositional media channels that can be considered to carry on the tradition of the early radical and party press: micro-media operating at the grassroots level, discontinuous, non-professional, persecuted or illegal. Today, heavily commercialised media and online communities such as Facebook, YouTube and MySpace constitute a common part of the repertoire of communication channels for activists engaged in alterative politics and protest movements. Are these new media channels a necessary means in order to reach beyond the circles of the likeminded? Or, do the use of these media point towards a mainstreaming process of political cultures of resistance to the establishment, eroding their very raison d’être? Combining a theoretical discussion of the inherent paradoxes in the celebration of new media technology as a source of democratisation and empowerment of civic cultures with an empirical focus aimed at exploring the changing repertoire of communicative tools used by social movement actors, this paper analyses two cases of online media practices in contemporary Scandinavian protest movements: 1) A series of civil disobedience actions and mobilisations of mass demonstrations before and after the eviction and destruction of the Youth House (Ungdomshuset) in Copenhagen, Denmark, in 2007-2008; 2) The popular demonstrations in connection with the European Social Forum in Malmö, Sweden in September 2008.
Update: The article has been included in the syllabi of a few courses, among them this course in Political Communication at the Central European University
Posted by Nils at 10:20 No comments: 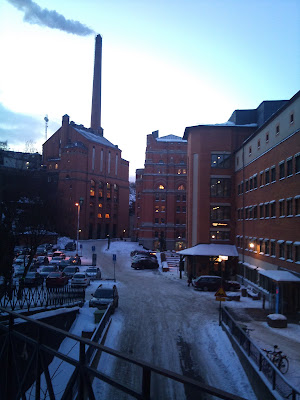