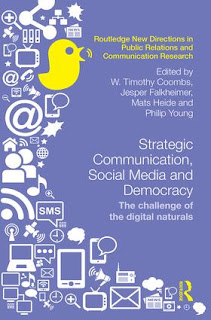 The first outcome of the study was a preliminary report included in my dissertation in 2013 ("An Awkward Tool").

The second one is this chapter in a brand new book from Routledge on strategic communication and social media in relation to democracy.

The book comes from the NEMO project with a lot of people from the Department of Strategic Communication at Lund university involved.

Abstract
Research on the use of social network sites by elected politicians has often been narrowed down to behaviour during election campaigns and using social media as a way of reaching voters and journalists. This chapter studies the way that members of parliament in the Swedish Riksdag use social media as a tool for intra-party competition. The analysed data consist of interviews with 37 parliamentarians from the parliamentary parties in Sweden, a parliamentary, party-centred democracy. The study shows that rather than simply adoption or non-adoption of social media based on beliefs about its power to attract voters, politicians have varying incentives to use and apply social media based on election cycles, different arenas of influence, rank, cultural differences between parties and individual traits such as age. It also shows that age is a more important factor in determining social media style than others. It contains one of the first studies of internal use of social media in parliamentary parties.

One of the most fascinating things I found was that branding in social media was more important during the nomination process than during the actual election. Another was that rather than being actually strategic, most of the things parliamentarians do in social media is intuitive. These themes I will explore in coming publications.
Posted by Nils at 12:22 No comments: